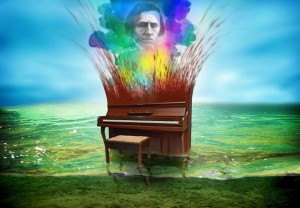 It happened, if I remember it correctly, in the second half of the 20th century, during Pablo Picasso’s stay in Warsaw. A Western journalist who was interviewing him, suddenly raised this issue:

– Could you please tell us, Master, what do you usually talk about during your meetings with Baron Rotschild? Is it about money necessary for financing your artistic projects?

The Master looked at the journalist in a rather hostile way and answered, more less in this tone:

– You know… Mr. Baron Rotschild is my friend and with friends I’m used to talking about art and nothing else. I only talk about money with my work colleagues.

So dear reader, as you’re probably guessing, my writing today will be about the gloom of daily life: artists earning money. And by artists I mean pianists who are starting off their career. Why pianists? Music lovers will guess: it is due to the audition stage for the great International Chopin Piano Competition which has just ended. The young and promising virtuosos from around the globe arrived in Warsaw and each „Zimerman-to-be” hoped to achieve a pass to the biggest concert halls in the world. Of course it wasn’t a real competition this time, the real one will be in October. It was just a taster, a first stage. It was a form of a foreplay in which a Lover called Hope decided to turn down some pianists while seducing others and encouraging them to take part in the next stage of the pursuit. The ones who passed this round, however, shouldn’t be the subject of any jealousy. From now on they will be dancing a crazy love dance with beloved Hope while doing back-breaking work day by day, spending endless hours at the piano and polishing their pianistic Ars Amandi. From now on their game (not foreplay anymore) will have everything at stake: privileges, contracts and big money.

Well, is the stake really worth all that hassle or maybe it’s all just for nothing? Not more than just a puff piece you can brag about in front of your family? Yes, that was a rhetorical question on my part. Let’s ponder: how many winners of the Chopin competition are introduced to the big world? Two, three, maybe twenty?

No, not even that, dear readers. The truth is less mundane: the Key to opening the Door to a glamorous career will be bestowed on only one lucky person (if it happens at all, it often occurred that the Competition didn’t choose a winner) and what will happen to the rest of the candidates? The rest, according to an old saying, will become a silence. The rest will taste the bitterness-not winning (read: tasting duck blood soup*) and come back home like Cinderellas, away from the limelight of the big world.

(*Until the 19th century black duck soup was a symbol in Polish culture. It was served to young men applying for the hand of their beloved one after the parents rejected their proposal. It is an element of the plot in Pan Tadeusz, a famous Polish epic poem by Adam Mickiewicz.)

Not many young pianists, as I suspect, have friends who are wealthy bankers and will sponsor their artistic development – the future perspectives for young unfulfilled Zimermans apparently don’t seem to be great. From childhood years to adulthood they have been working their backs off for the most important day of their lives (in Poland the Chopin competition is every aspiring musician’s dream) and then suddenly the Judge calls fate by throwing a dice and deciding their destiny. Not many people would be able to bear any more sacrifice and to take part in any further danse macabre sessions. The clock is ticking for them to settle down, to find a way to earn money. Earn money… unless of course we, as a society, decide that true artists don’t need any money, that they should be going around starving, with their own sense of dignity and not converge to fishwives and rabbles from the market. I have the impression though, that not only real artists think differently in this matter.

As far as I’m concerned, I take the view that competitions shouldn’t decide about the lives of young pianists. The competitions are only games for artsy dreamers like us: music lovers, journalists and music critics. And the games finish very quickly. After that there is a period of back-breaking everyday work and struggling to be a bread winner. At least that is what it should be like. But it’s not. Not for everyone. For those young people who treated the competition as a life goal, once they lose it, they are forgotten. Stanisław Drzewiecki, Moreiro-Lima, Głąbówna, Sosińska – these are just some of the examples. If the state educates whole squadrons of potential Zimermans in its public colleges, then it should also look after each and every one of them and make sure they would be able to progress professionally after receiving the diploma. But how? Even at festivals, feasts, philharmonic concerts, local events. If the stage is not for everyone then why was taxpayers’ money cynically wasted to educate so many artistic squadrons, not to mention breaking the hearts and lives of new, unfulfilled adepts at the same time?

To finish off I can’t help but to share one anecdote: at the concert of a young pianist who was shamelessly moonlighting and barbarizing the music, among the audience was the great Ferenc Liszt himself. When the young “talent” finished “playing” and started to bow, the audience booed and whistled, all except Liszt, who showed his generosity by awarding the pianists with an ovation.

– What are you doing Master? Why are you clapping for him? – said somebody standing beside Liszt. – He has made a joke out of the music!

– Why am I clapping? Because he doesn’t beg, doesn’t steal and doesn’t cause any trouble.

I have the impression that for today’s young artists-the ones who received blood duck soup, there is nothing left apart from begging. The rest is a silence they don’t want to break.